THIS COUNTRY IS CHANGING ITS STALIN-IMPOSED ALPHABET AFTER 80 YEARS 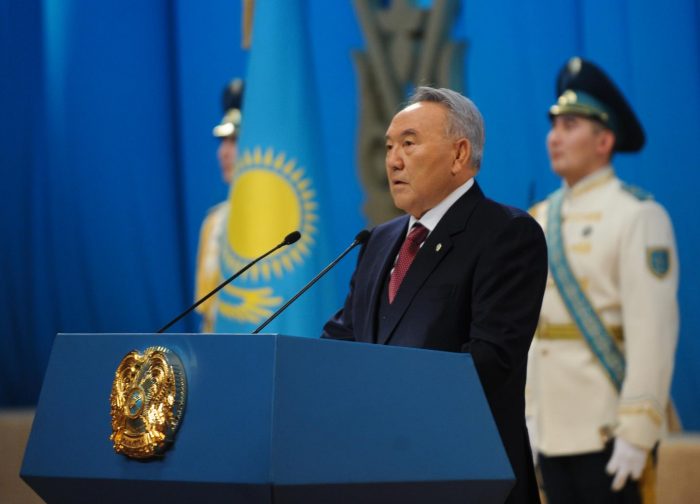 After almost 80 years with an alphabet imposed by Moscow, Kazakhstan is getting its own script and possibly a new name. President Nursultan Nazarbayev has signed off on the new, much shorter set of letters.
The central Asian country is one of Russia’s main trading partners and many of its inhabitants have spoken Russian for centuries, after living under the control of the Russian Tsars and then becoming part of the Soviet Union. Russian is widely spoken in Kazakhstan but despite Moscow’s influence, the country retains its own distinct language.
The oil-rich state’s other language is Kazakh—a Turkic language which shares few similarites with the Russian language.

Kazakh speakers used Arabic and then Latin script to write in their native language, until Soviet autocrat Joseph Stalin decreed in the 1940s that Kazakhstan and other Soviet republics around it must implement a script heavily inspired by the Cyrillic alphabet that is more suited to Russians. The political decision gave Soviet linguists a headache that Kazakh authorities are now hoping to remedy.

The script’s very creation in what was once the medieval Kingdom of Bulgaria, aimed to translate Christian texts into the languages spoken by tribes in Eastern Europe. Besides Russia, Belarus, Bulgaria, Macedonia, Serbia and Ukraine have used it for centuries, tweaking or adding a symbol or two over the years, to account for any specific needs of each nation’s tongue. The longest versions of the alphabets are the Russian and Ukrainian ones, each with 33 symbols. Adapting it to the Kazakh language however, became a much tougher ask.
Kazakhstan’s President Nursultan Nazarbayev delivers an annual state of the nation address in the Kazakh capital Astana, on December 14, 2012. Nazarbayev called today for a modernisation drive to turn the energy-rich Central Asian country into of the world’s most developed, including a switch to the Latin alphabet.

On Stalin’s orders, Soviet officials drafted a cumbersome alphabet for Kazakhstan, adding nine symbols that do not exist in Russian, but also omitting a handful of letters that are not necessary in Kazakh but vital for writing in Russian, Kazakhstan’s second language. This meant that since the days of Stalin, typing machines, and subsequently computers as well as cell phones, need 42-letter keyboards to accommodate writing in both languages.

Other Turkic-speaking nations under Soviet domain, such as Azerbaijan and Turkmenistan, also had to transition but many ditched Stalin’s system following the Soviet Union’s collapse, reverting to a Latin alphabet, similar to the one Turkey has long used.

Kazakhstan, one of Moscow’s most loyal neighbors, retained its keyboard-stretching, Stalinist-era script until last year, when the Astana government decided enough was enough.

“The changes in the Kazakh alphabet were political,” President Nazarbayev declared last year, asking officials to plan for adopting a more suitable, Latin script by 2025.

Nazarbayev’s administration issued the approved set of letters that will replace the Russian-inspired alphabet in a statement published online on Tuesday, with a conversion table showing 30 symbols. The alphabet would be totally recognizable to a Western reader as it effectively comprises letters present in every modern Latin alphabet.

Among the eliminated letters is a derivative of the Cyrillic “K,” which means Kazakhstan’s own name will change, likely to “Qazaqstan.” Notably, the alphabet will also adopt the Western practice of using two letters for both the “Sh” and “Ch” sounds, dropping the single Russian letters previously used for each sound.

Russia’s Soviet-era hegemony over its neighbor and the convoluted nature of the Moscow-imposed alphabet have still loomed large in modern times. According to Kazakhstan’s last census in 2009 more Kazakhs said they spoke and wrote fluently in Russian (85 percent) but only 62 percent of the population said the same of Kazakh, The Guardian reported.

Nazarbayev has repeatedly stated that his desire to stop using the alphabet implemented under Stalin is not a swipe at Russia, which remains a major partner for his own regime.
Source:
http://www.newsweek.com/