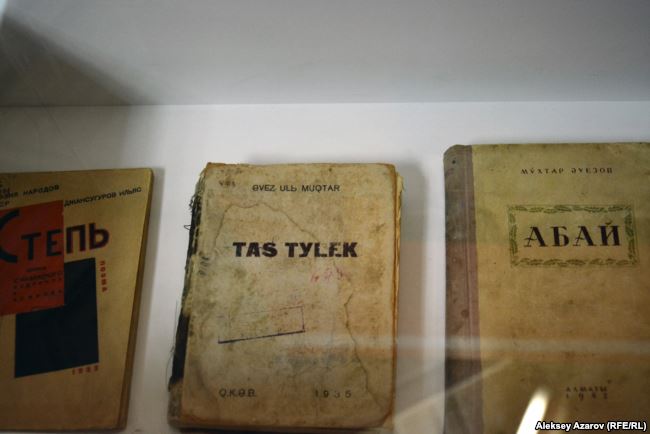 The National Academic Library of Kazakhstan has a rich literary fund. Kazakh classical literature pieces written in Latin script are now made available anywhere in the world. Electronic copies of these books are published on the official website of the library. So far only 30% of the publications in Latin script have been made electronic and are stored in the funds of the major libraries of Kazakhstan. The National Academic Library of Astana has a unique collection of pre-WWII literature in the Latin alphabet, including the works of Zhambyl Zhabayev, Maxim Gorky, Daniel Defoe and Mark Twain. These books were published massively in 1929. At that time, educational and fictional literature was in great demand. DARIGA DAURENBEKOVA, HEAD, MANUSCRIPTS DEPARTMENT, NATIONAL LIBRARY OF KAZAKHSTAN: – Of course, fiction and literature of domestic authors are of interest. Works by authors like Abai Kunanbayev, Ybrai Altynsarin and Saken Seifullin were printed in the beginning of the 20th century. The library also has electronic books by Lenin, Stalin and Voroshilov. Popular literature is also tuned digital. The process requires patience and caution. An electronic copy is uploaded to the National Academic Library’s website. Then it is made available to the world. Many books have the ‘Qazaqstan baspasy’ inscription. At that time, Kazakhstan had only one publishing house. Many works serve as evidence of how the Kazakh language had changed before it was transitioned into the Cyrillic. NURKHAN SERKEBAYEV, HEAD, INFORMATION AND CULTURAL PROGRAMS, NATIONAL LIBRARY OF KAZAKHSTAN: – If we take physics textbooks of 1935, then a capital letter of the word ‘physics’ is written with the Latin ‘P.’ However, in 1939 we can see that the letter is written with another ‘F’ letter. These rare books and manuscripts transformed into the electronic format will provide wide access to the national and cultural heritage of Kazakhstan. The entire library fund of the republic will be digitized until 2020.