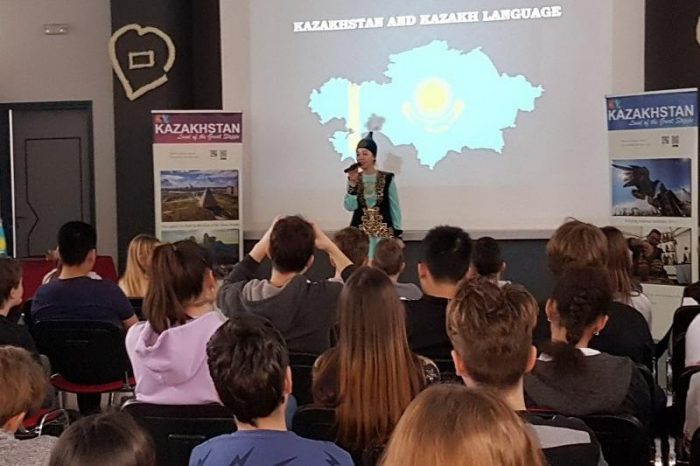 ASTANA. KAZINFORM – An event dedicated to the development of the Kazakh language and switchover to the Latin-based Kazakh alphabet was held at the Matija Gubec International School in Zagreb, Croatia this week, Kazinform has learnt from the Kazakh MFA’s press service.
The event was held within the framework of the International Mother Language Day. The Kazakh Embassy in Croatia organized the open lesson for students and teachers of the school. At the lesson, Croatians learnt more about the Latinized Kazakh alphabet, Abay Qunanbayev’s poems, popular songs of Shamshi Kaldayakov and Kazakhstan’s achievements over the years of independence. Organizers of the event highlighted unique traditions of the Kazakh folklore – the art of aqyns (improvising poets and singers), rich epos and bright literary, poetic and philosophic heritage. It was stressed that steps Kazakhstan takes to preserve and develop the native language and culture are of paramount importance. The organizers believe that implementation of the nationwide program Rukhani Janghyru (Spiritual Revival) spearheaded by President Nursultan Nazarbayev and switchover of the Kazakh alphabet to the Latin-based script will bring cultural and spiritual development of Kazakhstan to a brand new level.
The International Mother Language Day was instituted by UNESCO in 1999 and is observed annually on February 21 with a view to develop language and cultural traditions around the world.
Inform.kz