Kazakhstan Cheers New Alphabet, Except for All Those Apostrophes 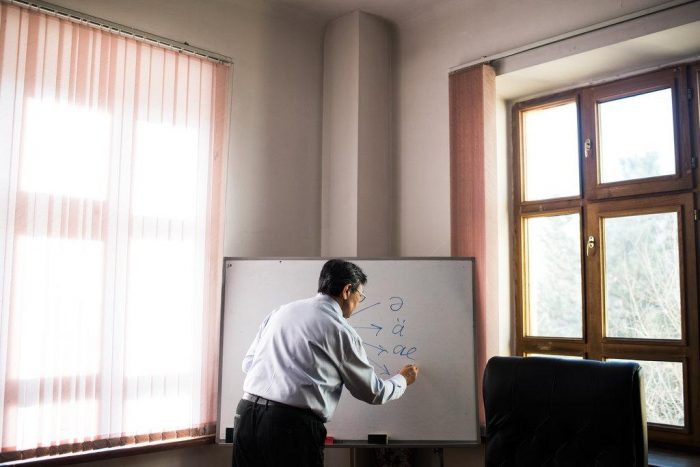 By Andrew Higgins
ALMATY, Kazakhstan — In his 26 years as Kazakhstan’s first and only president, Nursultan A. Nazarbayev has managed to keep a resurgent Russia at bay and navigate the treacherous geopolitical waters around Moscow, Beijing and Washington, keeping on good terms with all three capitals.

The authoritarian leader’s talent for balancing divergent interests, however, suddenly seems to have deserted him over an issue that, at first glance, involves neither great power rivalry nor weighty matters of state: the role of the humble apostrophe in writing down Kazakh words.

The Kazakh language is currently written using a modified version of Cyrillic, a legacy of Soviet rule, but Mr. Nazarbayev announced in May that the Russian alphabet would be dumped in favor of a new script based on the Latin alphabet. This, he said, “is not only the fulfillment of the dreams of our ancestors, but also the way to the future for younger generations.”

The decision, however, raised a tricky issue: how to write down a tongue that has no alphabet of its own but has always used scripts imported from outside.

The president’s ardent intervention in Kazakhstan’s passionate debate over a new script and his proposed solution — he wants lots and lots of apostrophes — have highlighted how virtually everything in this former Soviet land, no matter how small or obscure, hinges on the will of a single 77-year-old man, or at least those who claim to speak for him.

“This is the basic problem of our country: If the president says something or just writes something on a napkin, everybody has to applaud,” said Aidos Sarym, a political analyst and member of a language reform commission set up last year.

Mr. Nazarbayev, he added, deserves credit for turning Kazakhstan into the most stable and prosperous country in a region that has been battered by political upheaval and economic decay. But language, Mr. Sarym noted, “is a very delicate sphere that cannot be dictated by officials.”

As in many newly independent countries struggling to create a sense of national identity after subjugation by a foreign power, language in Kazakhstan is a highly sensitive issue. Many people here, including ethnic Kazakhs, still often speak Russian.

But since emerging from the ruins of the Soviet Union as an independent country in 1991, Kazakhstan has steadily chipped away at the legacy of Moscow’s political and cultural hegemony.

It has replaced Russian with Kazakh as the main language of education and government, put English on a par with Russian in foreign language teaching and produced a torrent of Kazakh-language films and television programs that celebrate the country’s culture and long-vanished nomadic traditions.

The shift to the Latin alphabet, to be completed by 2025, has been widely cheered as a long overdue assertion of the country’s full independence from Russia — and its determination to join the wider world. The main objections have come from the Russian Orthodox Church in Moscow and ethnic Russians living in Kazakhstan.

Far less popular, however, has been a decision by the president in October to ignore the advice of specialists and announce a system that uses apostrophes to designate Kazakh sounds that don’t exist in other languages written in the standard Latin script.

The Republic of Kazakhstan, for example, will be written in Kazakh as Qazaqstan Respy’bli’kasy.

In a country where almost nobody challenges the president publicly, Mr. Nazarbayev has found his policy on apostrophes assailed from all sides.

Linguists, who had recommended that the new writing system follow the example of Turkish, which uses umlauts and other phonetic markers instead of apostrophes, protested that the president’s approach would be ugly and imprecise.

Others complained the use of apostrophes will make it impossible to do Google searches for many Kazakh words or to create hashtags on Twitter.

“We are supposed to be modernizing the language but are cutting ourselves from the internet,” Mr. Sarym said.

Amid a storm of mockery and protest on social media, a Kazakh film director, Saken Zholdas, produced a music video ridiculing the president’s apostrophe-laden approach as a recipe for turning written Kazakh into an unsightly and unreadable gobbledygook.

Uzbekistan, which dropped Cyrillic in favor of the Latin script to write its own Turkic language in the 1990s, has an alphabet that sometimes requires apostrophes but not nearly as many as those mandated by Mr. Nazarbayev.

“Nobody knows where he got this terrible idea from,” said Timur Kocaoglu, a professor of international relations and Turkish studies at Michigan State, who visited Kazakhstan last year. “Kazakh intellectuals are all laughing and asking: How can you read anything written like this?”

The proposed script, he said, “makes your eyes hurt.”

The uproar is testing the limits of Mr. Nazarbayev’s approach to government: He brooks no opposition but is also keenly attuned to the public mood. Signaling a possible willingness to change course, an influential ally of the president, the head of the Senate, Kassym-Jomart Tokayev, said last month that it was “still too early” to start using apostrophes in newspapers and elsewhere because “a final decision” had not yet been made.

How to transcribe Kazakh, a Turkic language developed by nomadic herders without an alphabet of their own, has long been a particularly fraught issue. For centuries, it was written using the script of Arabic, the language of Islam, which most Kazakhs have long at least nominally practiced.

Kazakhstan switched briefly to the Latin alphabet at the start of the last century, and Russia’s Communist leaders after the 1917 revolution initially supported the use of a Latin script.

Later, growing fearful of pan-Turkic sentiment among Kazakhs, Uzbeks and other Turkic peoples in the Soviet Union, Moscow between 1938 and 1940 ordered that Kazakh and other Turkic languages be written in modified Cyrillic as part of a push to promote Russian culture. To try to ensure that different Turkic peoples could not read one another’s writings and develop a shared non-Soviet sense of common identity, it introduced nearly 20 versions of Cyrillic, Mr. Kocaoglu said.

After leading Kazakhstan to independence, Mr. Nazarbayev, concerned with a backlash from the country’s large ethnic Russian population, stalled on demands from nationalists for a swift revival of the Latin script. Other newly independent countries with similar Turkic languages like Uzbekistan and Azerbaijan all stopped using Cyrillic, but they had far smaller Russian populations.

“We all wanted to create our own states and our own cultures to help us escape from the collapsing Soviet Union,” said Anar Fazylzhanov, the deputy director of the Institute of Linguistics in Almaty, the country’s business and cultural capital. “But changing the alphabet was much more politically difficult in Kazakhstan.”

In the past two decades, however, the demographic balance has shifted in favor of ethnic Kazakhs, following the departure of many ethnic Russians, whose numbers fell from about 40 percent of the population at independence to about 20 percent today. This opened the way for Mr. Nazarbayev to endorse the axing of Cyrillic.

“Cyrillic was part of Russia’s colonial project and many see the Latin alphabet as an anti-imperial move,” said Dossym Satpayev, a prominent Kazakh political commentator.

The Russian Orthodox Church and Russian nationalists protested what they interpreted as a sellout to the West and an attack on Russian culture. Kazakhstan even had intelligence reports, according to experts familiar with the matter, that the Russian Parliament was preparing a statement praising Mr. Nazarbayev as a great statesman and pleading with him to preserve Cyrillic so as to cement his legacy as a leader who has kept the peace among different ethnic groups.

The move to the Latin alphabet accelerated in April with the establishment by Mr. Nazarbayev of a National Commission for the Modernization of Society, which included a panel of linguists entrusted with working out how Kazakh sounds should be transcribed.

Because Kazakh features many sounds that are not easily rendered into either the Cyrillic or Latin alphabets without additional markers, a decision needed to be made whether to follow Turkish, which uses the Latin script but includes cedillas, tildes, breves, dots and other markers to clarify pronunciation, or invent alternative phonetic pointers.

In August, the linguists proposed using an alphabet that largely followed the Turkish model.

The president’s office, however, declared this a nonstarter because Turkish-style markers do not feature on a standard keyboard.

The scholars on the language commission, led by Erden Kazhybek, the head of the Institute of Linguistics in Almaty, then suggested using digraphs, or several letters to indicate a single sound, like “ch” in English.

This approach initially got a warmer reception from the president’s entourage but was then banished when Mr. Nazarbayev suddenly issued a decree on Oct. 27 ordering that apostrophes be used instead of Turkish-style markers.

The modified Latin alphabet put forward by Mr. Nazarbayev uses apostrophes to elongate or modify the sounds of certain letters.

“When scholars first learned about this, we were all in shock,” Mr. Kazhybek said. Tipped off about the president’s proposals in advance, he had rushed to Astana, the Kazakh capital, to plead for a reconsideration but was told that apostrophes were not going away.

The only reason publicly cited by Mr. Nazarbayev to explain why he did not want Turkish-style phonetic markers is that “there should not be any hooks or superfluous dots that cannot be put straight into a computer,” he said in September. He also complained that using digraphs to transcribe special Kazakh sounds would cause confusion when people try to read English, when the same combination of letters designates entirely different sounds.

But others saw another possible motivation: Mr. Nazarbayev may be eager to avoid any suggestion that Kazakhstan is turning its back on Russia and embracing pan-Turkic unity, a bugbear for Russian officials in both czarist and Soviet times.

Also likely playing a role in the president’s active involvement has been his advancing age and the question of how he will be remembered when he eventually steps down or dies.

“The president is thinking about his legacy and wants to go down in history as the man who created a new alphabet,” said Mr. Satpayev, who supports the switch to Latin script but not the president’s version. “The problem is that our president is not a philologist.”